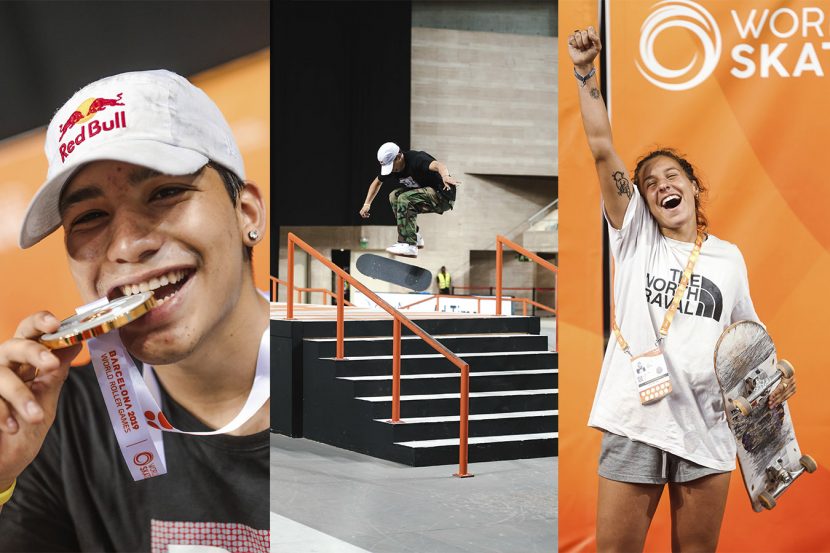 The Peruvian rider and the Catalan skater dominate in the first weekend of the World Roller Games Barcelona. Frantic is the perfect adjective to describe the weekend we have lived with some of the greatest representatives of skateboarding worldwide.

More than 60 skaters were registered for the BEO 2019 qualifiers, a competition with an exceptional scenario. The Palau Sant Jordi witnessed a Friday marked by a show of jam session in heats of 3 riders that left us a spectacular battery of tricks.

Riders like Angelo Caro, Alex Decunha and Bruno Senra were the great dominators of this first court in which some of our team members like Rafa Bocanegra, Chris Khan and Christian Estrada also joined.

On Sunday came the semifinals and with it the moment of truth for many of the participating skaters. The 8 finalists of the BEO 2018 were waiting for them with their arsenal of prepared tricks. Skaters the likes of Gustavo RIbeiro, Danny León or Matias Dell Olio were not going to make things easy for qualified qualifiers.

So it was. Only the Russians Egor Golubev and Konstantin Kabanov joined the train of the finalists making a very powerful semifinals, and arrived at 13h the time for the final outcome.

Gustavo Ribeiro, Jorge Simoes, Adrien Bulard, Egor Kaldikov, Egor Golubev, Konstantin Kabanov, Matias dell Olio and Angelo Caro were the eight warriors who remained standing for the last great battle, a battle that did not disappoint with a rounds at stratospheric levels and with some tricks never seen in a competition in our city.

The eight shone under the spotlights of the Palau Sant Jordi but three were the ones who raised the bar above the rest. Jorge Simoes delighted us with a creative and unique ride, without missing any of his three best tricks. Gustavo Ribeiro and Angelo Caro starred in the final battle that was not decided until the last trick of the competition. Gustavo left the audience with his mouth open with his 360 flip fs noseblunt in the handrail, which was answered with forcefulness with the 540 flip fs lipslide by Angelo, a trick that crowned the Peruvian skater as the winner of the competition and that drove all the attendees crazy .

The Barcelona rider was the most solid throughout the weekend. 12 were the skaters that showed up in the semifinals that were held on Saturday and only 6 would be chosen to play the championship. Mar was the dominator with a very solid round and many fliptricks that put her in first position for the final along with high-level skaters such as Andrea Benítez or small off-road Daniela Terol who never miss the appointment.

On Sunday, after the men’s semifinals, the final battle for our warriors arrived and it was the house that gave the best they had on their skate. Andrea Benítez came in third with a solid round and a feeble bs in the handrail that added many points. Daniela Terol and her duracell surprised us once again with a speed and a number of tricks unthinkable for a girl of 10 years, but none could with Mar Barrera, who always with her big smile improved the level of the semifinals and drove the audience crazy. bs flip over the bank to bank in the time of discount and raised it with the win.

So one more year the BEO has been a success and some of the best skaters in the world have come together to enjoy the passion that unites us, skateboarding!